Currency Risk Does Not Belong in Your Bond Portfolio 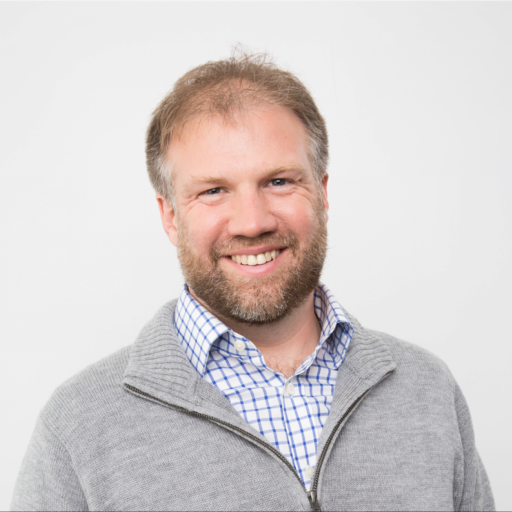 When you buy things in a foreign currency—whether that’s goods and services as a traveler, or stocks and bonds as an investor—you are faced with a central issue: How far will your dollar go?

Exchange rates ebb and flow on a daily basis, which creates currency risk. For the infrequent traveler, that may be an acceptable risk, but for the investor, the currency risk could wipe out his portfolio gains.

Today, this is an increasingly visible issue for investors as the integration of global financial markets is making it easier for investors to access far-flung markets and asset classes.

When foreign investments are denominated in a currency other than U.S. dollars, the returns you make on them must be translated back to American currency. That means an international fund’s performance, when reported in U.S. dollars, also includes the effect of exchange-rate movements.

Individual investors are not immune to currency movements, either. If his or her own investments are issued in a foreign currency, he or she may lose if the exchange rate moves against them, even if the investment itself has a positive return.

For example, if John is invested in Apple Inc. bonds that are denominated in the yen, and the yen depreciates against the dollar, when John converts from the depreciated yen back to the dollar, his investments may be worth less even if Apple sees great returns.

Yet a well-diversified portfolio can help avoid that risk, allowing investors to tap the upside of diversification while managing risk associated with currency fluctuations.

The Origin of Currency Risk

Governing bodies around the world set economic agendas independently. Monetary policies, as a result, range from economic region to economic region, resulting in varying interest rates. Interest rates, in short, are the rate at which borrowers pay lenders.

Countries use interest rate targets as tools to manage their own economies. For example, central banks can reduce interest rates to encourage investment and consumption in that country—or raise rates to deter borrowing. Interest rates directly affect currency exchange rates and thus create currency risk. While rates are being re-evaluated by countries, the good news is that rate changes do not work in lock step. For an investor who’s invested in bonds of different countries, the internationally diversified bond portfolio may allow investors to lessen their overall interest rate risk.

Importantly, however, this exposure to currency risk is an uncompensated risk. Changes in exchange rates create return volatility without introducing additional expected returns. While rate changes may randomly add returns in your favor in the short term, the expectation should always be of zero return over the long term.

However, the same carry strategies exhibited large losses during the 2008 financial crisis, making the point that such strategies’ “tail risk” (risk of unpredictable losses) potentially cancels out their profitability during more normal times.2

How to Mitigate Currency Risk in Bonds

There are two ways to mitigate currency risk:

A U.S. investor who wants to invest in the bonds of the Mexican government, for example, can invest in bonds that are purchased, have income issued, and have principal returned in U.S. dollars. By doing so, he or she she is never exposed to USD/MEX currency risk.

Another way to mitigate currency risk is to put on a hedge. In the simplest terms, a currency hedge is insurance against a currency move in either direction, for or against you. A currency hedge technically involves two parties exchanging a set amount of one currency for another at a predetermined exchange rate and amount at a future date. When you hedge currency risk, you can remove currency risk from your investment… at a cost. The hedge itself costs something to manage and maintain. The cost depends on the currency being hedged—liquid developed currencies are generally easier and cheaper to hedge than emerging ones. In exchange for this cost, your investment will likely have lower volatility, as the currency fluctuations are removed.

There are many ways to hedge currencies. These include forwards, swaps, futures, and options. All of these methods allow investors to lock in a set exchange rate today to eliminate potential exchange rate volatility that may arise in the future. To permanently hedge an investment, an investor must continually close contracts that have come due, and invest in new ones further into the future. This process is called “rolling” the contracts, and can have a small ongoing transaction cost.

Currency hedging, like most insurance, is not free, and so the benefits need to be balanced against the cost.

If hedging costs you more than it benefits you, you shouldn’t do it. To find out, weigh the reduction in volatility against the incremental cost of buying the hedged (rather than unhedged) version of the ETF.

A Vanguard study analyzed the impact of currency hedging on foreign bonds and stocks and found that hedging is beneficial for bonds but not for stocks.3 This is because of the different volatility characteristics of stocks and bonds, and their correlations with currency moves. Bonds, as an asset class, are typically less volatile than both stocks and currencies:

In contrast, because currency risk is usually a very small proportion of volatility in foreign stocks, there is far less benefit from hedging the stock exposure. Compare the relative contribution of the currency component to the overall return and volatility in bonds and stocks:

Impact of Currency Risk on Bonds vs. Stocks 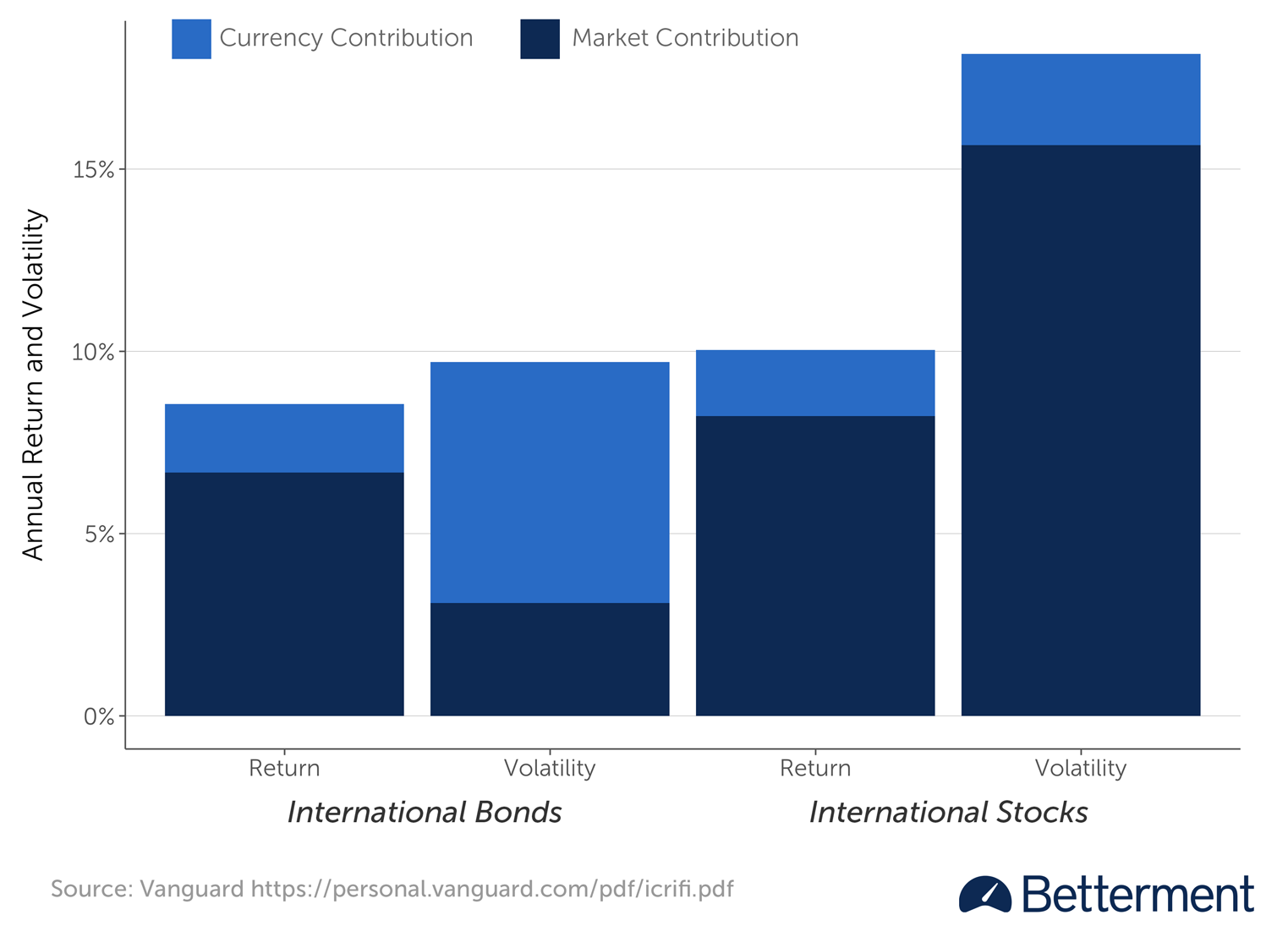 Whether it’s stocks or bonds, currency does not contribute substantial returns. However, it has a substantial risk in terms of volatility, and all the more so when it comes to bonds. The increase in risk of not hedging bonds is significant and cannot be overlooked.

Volatility is only part of the equation. The other aspect of making the decision about hedging is the cost of hedging. The below chart illustrates the additional cost of the hedged ETF and the volatility reduction associated with using a hedged ETF. As is seen with the Vanguard Total International Bond ETF, BNDX, the ETF without the currency risk is not always the most expensive. Although BNDX eliminates the currency risk, it also charges 15bps less in terms of expense ratio cost. The reduction in currency volatility associated with stocks, on the other hand, is less drastic despite the higher cost of hedging. If you are not as familiar with the funds, see the bulleted list below.

Volatility Reduction and the Additional Cost of the Hedged ETF

Note: HEFA, HEEM have fee waivers until 2020. We are using the expected long-term expense ratios.

If you invest with Betterment, we have designed your  bond portfolio to mitigate currency risk. We believe that the volatility attributed to currencies is not a compensated risk, and so, when affordable, it should be avoided. Whether we eliminate the risk through hedging or through a direct purchase of U.S. denominated bonds largely depends on the geography of the bond ETF. (See our interactive graphic to determine the exact geographical allocation of your portfolio.)

Geography is an important factor to take into account when determining the best way to mitigate currency risk. While it’s prohibitively expensive to hedge emerging investments due to the larger number of currencies and the inefficiency of those markets, a basket of developed market currencies can be hedged efficiently.

Because of these considerations, your international developed-country bond ETFs at Betterment are hedged at the ETF level (BNDX). BNDX hedges currency fluctuations inside of the fund. In this case, the fund purchases one-month forward contracts to exchange currencies in the future at today’s rates. If rates move between now and then, the investor is not exposed to those moves, because the value of the forward contract will offset the moves in currency.

In contrast, your emerging market bonds are denominated in USD (VWOB, EMB, PCY) because of the cost considerations when it comes to hedging multiple emerging market countries. While the bonds are issued from developing countries, both their value and interest is defined in USD, removing concerns about currency risk.

This article originally appeared on ETF.com.