Why the 4% Rule Is Broken

There are fundamental flaws in the popular 4% rule for retirement income, including its reliance on a higher yield environment.

In today's economy, you need a better, more dynamic approach to planning your retirement income.

For the last 20 years, many retirees have relied on the so-called 4% rule when determining how much of their nest egg to spend each year. As the name implies, the rule is notable for its simplicity: as long as you withdraw no more than 4% of your initial portfolio, adjusted for inflation, you shouldn't run out of money. That rule is now being called into doubt—and for good reason.

In today’s more volatile, lower-yield climate, this flat-rate withdrawal approach can put you at greater risk of outliving your money, or living on less than you could. Recent research has caused considerable debate, and sparked some much-needed innovation around that old guideline.

A rigorous new study led by Betterment’s quantitative portfolio specialist Lisa Huang finds that applying the 4% rule under current market conditions is expected to prematurely deplete a retirement portfolio 30% of the time, assuming 3% inflation and a 30-year retirement.1 To arrive at this conclusion, we ran a Monte Carlo simulation to test thousands of trial futures, with the results presented in the chart below. 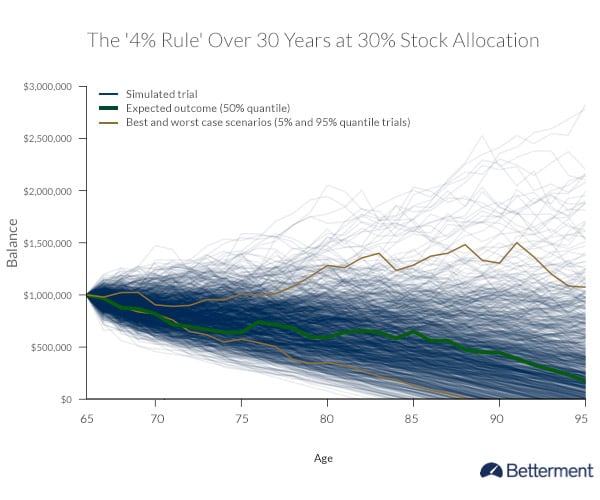 Our research led to the creation of Betterment’s new retirement income product, released in April 2014. Our online retirement solution automates withdrawals, calculated based on a dynamic formula, fully integrated with an automated, low-cost, liquid portfolio. The algorithms are optimized to ensure that there is less than a 4% chance of running out of money—and a 90% chance that the annual withdrawal amount never drops below 2% of the initial portfolio balance (with the annual withdrawals expected to be above 4% on average, often significantly so.)

The quest for stability

Credit for the 4% rule belongs to Bill Bengen, a financial planner in California, whose research on the topic was first published in the Journal of Financial Planning in the early 1990's. Bengen came up with a formula for what seemed to be a safe withdrawal rate that would accomplish the top goals of retirees:

However, while the 4% figure remained fixed in the public's imagination, the rates it relied on were anything but. Twenty years ago, the yield on a three-month Treasury bill was 6%. So while Bengen’s model called for a 50/50 stock allocation, even those with a more conservative asset allocation could still draw down 4% annually adjusted for inflation, and reasonably expect to preserve their capital. Even in 2002, the 5-year US Treasury yield was still 4.5%.

That’s no longer the case—today a three-month Treasury is .04% and a 5-year is around 1.67%. In fact at least one paper has speculated that the apparent success of the 4% rule during the last 20 years may have been dependent on specific market conditions—which have become less and less favorable—and called its success an “anomaly.”

It makes sense that the rule’s rise to popularity was a happy accident when you consider that the first decade after Bengen created his model was an exceptional time of low inflation and high corporate earnings in the U.S.

A fly in the ointment

But even without changes in the economic climate, the last couple of decades have highlighted several other, fundamental flaws in Bengen's approach:

The quest for a sustainable spending model

Understandably, many retirees prefer fixed withdrawal rates because they’re predictable—that’s why annuities are popular. But several companies, including Betterment, find that retirees fare much better with a dynamic withdrawal strategy over the long-term (without the restrictions of annuities).

Betterment’s Retirement Income service continually factors in a retirement portfolio's balance, projected inflation as well as retirees’ personal information, to come up with a dynamic asset allocation and spending plan that retirees can follow automatically—or further customize with a few clicks on their digital dashboard.

Generally, you can expect to withdraw more than 4% per year, depending on your age and risk profile. The initial portfolio starts with a 56% stock allocation and we use highly responsive algorithms within the product to factor in portfolio performance and create a glide path that’s designed to stave off longevity risk and preserve capital.

By contrast, the two other companies that now offer retirees a similar, dynamic spending model only approach the issue from a financial planning standpoint, as opposed to advice that is actually implemented in an automated fashion.

Last fall, Vanguard announced a new dynamic spending model for retirees which combines aspects of the 4% rule with the percentage-of-portfolio approach, in which you calculate a new withdrawal percentage each year, but don’t factor in inflation. This hybrid strategy sets a floor and a ceiling for withdrawals, based on the prior year.

And in March 2014, J.P. Morgan Asset Management announced a dynamic retirement income withdrawal strategy. This proprietary model combines five key factors (including life expectancy, assets and forward-looking market projections) to create a customized portfolio and spending plan that retirees can adjust as needed with their advisers.

However, neither of these two products are currently integrated with a live portfolio that automates the advice and the glide path—as well as the withdrawals—the way Betterment does.

Out with the old, in with the new

Dealing with a variable retirement income from year to year is a relatively new idea. Fortunately the Betterment model is designed to provide stability. The algorithms are optimized to balance the dual objectives of maximizing lifetime withdrawals, and keeping the withdrawal amount within a consistent range year after year.

Best of all, by working with some natural ups and downs in your income from year to year, you’re actually improving your overall outcome. With the Betterment income strategy, there is less than 4% chance you will run out of money.